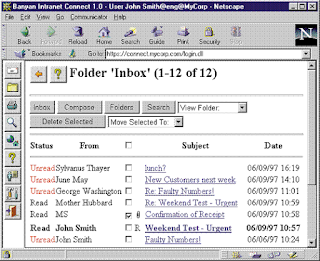 At the time all email was read through client programs native to each platform in a client-server architecture, so the product concept for BIC (project code-named Yoda) was to write a single email client that could run on any computer by using a browser. The market concept was to disrupt the corporate dial-up server market with an inexpensive process of having employees dial-up a local Internet connection while traveling, instead of placing long-distance calls back to headquarters to read their email.

The product was reported widely in the IT press since Banyan had dominated corporate networking but was viewed as starting to lose this market to Microsoft's Windows NT, and a web-based Intranet product showed renewed interest in the company. Here's the first release as covered in Infoworld: 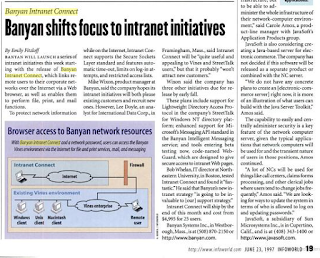 The coding team at Banyan included the amazing talents of Bill Muth and Rakesh Godhani. The technology was a web service written in C running on Microsoft's IIS (ISAPI interface) on Windows NT Server. But BIC also implemented full kernel-level security so that a login using BIC gave users full network access with strictly enforced permissions. BIC effectively turned a Windows NT server into a multi-user mainframe. This article from the Banyan Technical Journal dives into the structure, deployment, and administration of BIC. Oh, by the way, in the article you may notice this 1998 reference to The Cloud: